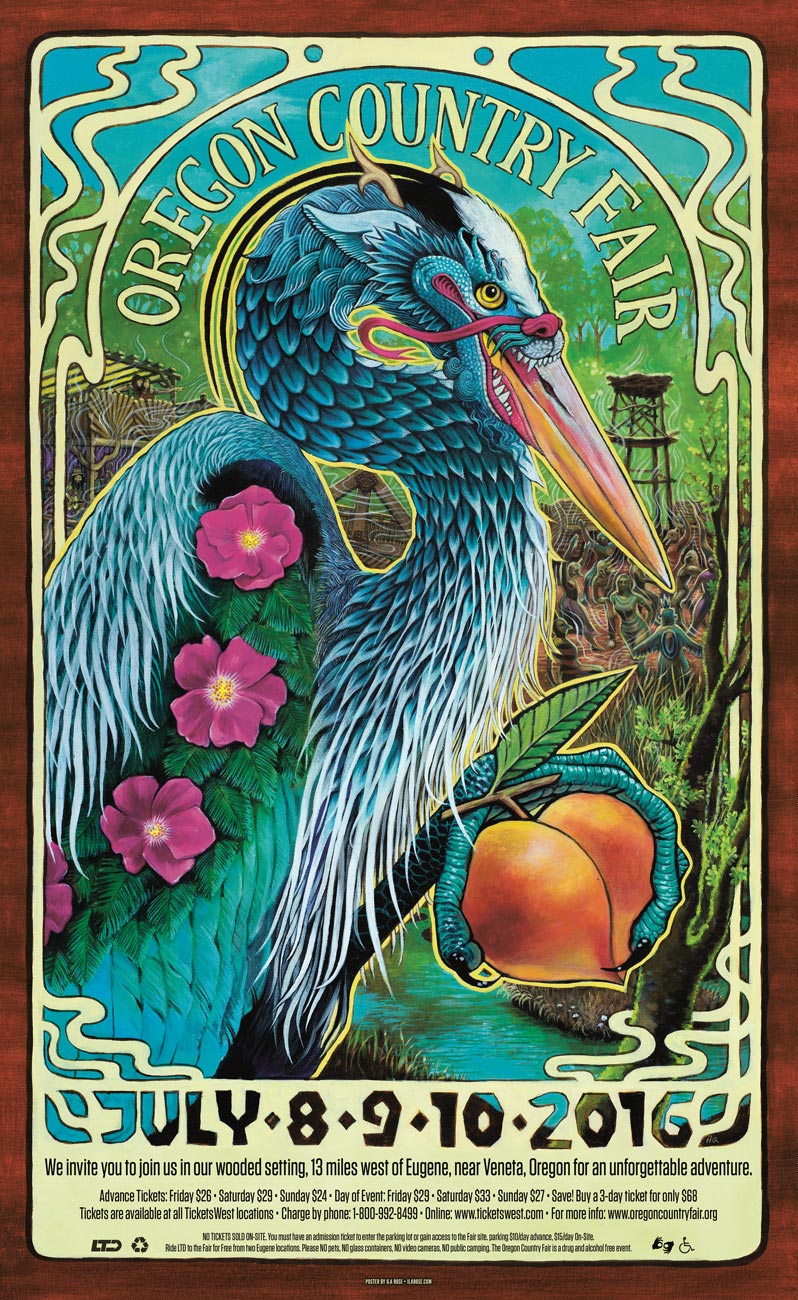 This years Oregon Country Fair poster design developed out of a desire to pay homage to the land and the creatures that live on it year round.  We are fortunate to get to use this space for our festivities each year.  We owe a debt of gratitude to those involved in studying and maintaining the land year round as well as to the spirits of the land that permit and sometimes seemingly entertain the celebration.

Symbolism in the Poster:

The heron is regal in stature and a frequent visitor to the fair site.  The heron is associated with longevity, tranquility, determination and resourcefulness –to name a few.  It is at home with elements, earth, water and air, illustrating a confidence in moving between multiple spaces or dynamics.  With one foot immersed in water and one raised to the sky or planted on land, the heron becomes a symbol for easy transitions, one who inhabits the “space between,” a space neither here, nor there, void of time and, therefor, one who welcomes readily the Here and NOW.  Rather than struggling against the elements, the heron acts as a reminder of our shared values to work with and support the land we inhabit.

The dragon has been a long held symbol for the Oregon Country fair.  It is a very powerful symbol that holds a vast range of meaning.  Dragons, like Herons, represent balance and presence.  They also symbolize strength and power.

The combination of Dragon and Heron become a sort of Phoenix.  The Phoenix is a resilient symbol; it rises from the ashes, or represents renewal.  This resilience inspires us to promote and encourage land preservation and reverence at a time when humanity seems to be vastly disregarding it’s impact on the planet.  The phoenix embodies the regeneration of the land year after year.

The combination of creatures (dragon and heron) to form another (phoenix) creates a conversation about joining forces.  This amalgamative creature beckons us to unite toward a greater goal, a shared project, and a collaborative vision of gracefully coexisting with our environment.

The Phoenix’ neck is curved to form the eight, or the path we walk. The eight is the symbol of infinity.  We walk this ever-cycling path together.

In the intersection of the eight is Jill’s crossing, the bridge over the Long Tom River.  The rest of the scenery in the poster image unfolds around the placement of the bridge, an obvious symbol of connection. The bridge is also a symbol for transitions, progress, and stability.

Spirits dance around the tower, and their energy permeates the air.  Perhaps we are watched over, as we celebrate, by ancient spirits of the land.  It is certain there is magic about the Oregon Country Fair and we are blessed to experience it.

To sum it up, I designed this poster as a reminder that the Oregon Country fair is not just about the party; it is a deep celebration of our interconnectedness and that is something to celebrate.

Ila Rose is an artist working in the Pacific Northwest, namely, Oregon.  She is part of a group of painters who refer to themselves at Accumulative Realists, a movement that draws from Surrealism, Meta-realism, Visionary art and accumulated symbology throughout space and time as a means to retell old mythologies and concepts as current composite narratives, creating new stories about the magic and transformative reality in which we exist.

“There’s always been this desire to understand human suffering,” Rose explains. In her art you might see conversations about deformity, decay, death, inequality, emotion, feminism, environmentalism and self-reflection. Her work tends to be very colorful yet dark, complex, detailed, luscious and surreal.  She occasionally refers to her work as dreamscapes, elaborating that the paintings come to her as a dream would in sleep or that they feel like a sort of subconscious vomit.