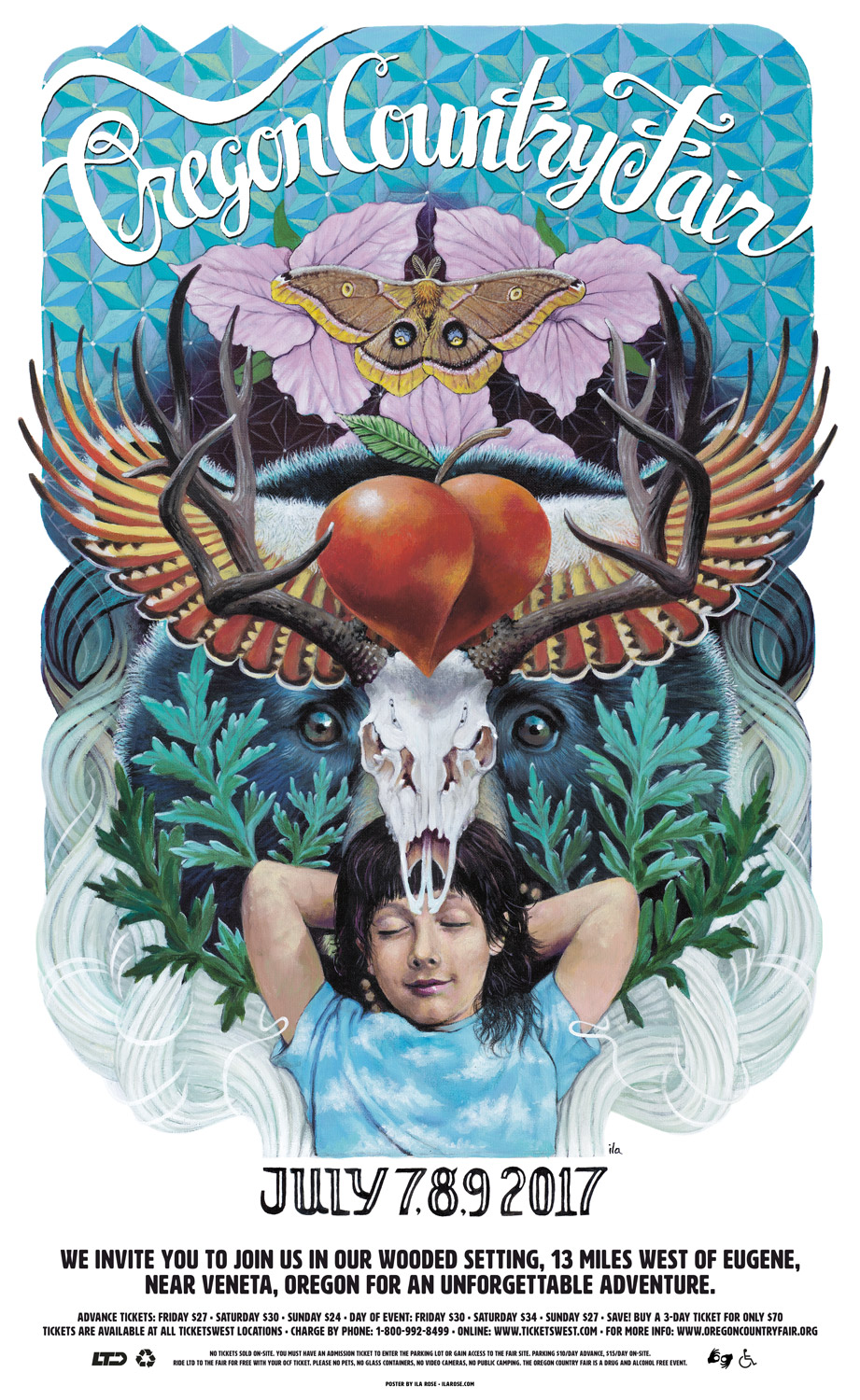 The imagery in this year’s poster was based around the concept of a dream.

In the image a child is peacefully reclined -perhaps in a grassy field.

The Child
I attempted to imbue child with ambiguous qualities to create a more universally relatable character rather than a separate individual with distinct identifying traits.  This child wears a shirt depicting clouds in a blue sky, reminiscent of those easy dreamy moments we’ve all spent at some point, gazing at passing clouds -suspended and absorbed in the present moment- and imagining what spirits or characters they might embody.

The Skull
When I was about the age of the child in the image I found an antlered skull in the woods near my house. I remember how much magic that moment held for me, and the wonder I felt as I envisioned where it had been and the life it had once embodied. That discovery in my childhood symbolized a time when the idea of death, instead of holding a fearful energy, spoke of a mysterious and even potentially magical place and time beyond the tangible world I knew.  The environment around a child is still a wonder.  Each element a child encounters is experienced in a purer form before pain or suffering shift our perception of the objects, places, and people we come across throughout the course of our lives.  My Oregon Country Fair poster image is an attempt to capture the enigmatic and wondrous exploration of our environment before our brains and our egos attempt to define and logically map it all out.

The Soaring Heart
The winged heart is made from the combination of peach and flicker wings. The winged heart symbol is originally a Sufi symbol, essentially representing the heart as a medium between spirit and matter. It embodies an idea that the heart is attracted to the things of spirit or non-matter rather than just the stuff of the material world.  One way of explaining this concept is that it simply depicts the idea of a “free spirit”.  People associate this image with a freedom from addiction or the freeing of the soul of a loved one from the physical realm.  So, essentially, we can see that this symbol represents a separating from the physical plane, coming from a positive, loving space.  Outstretched wings are an image borrowed from ancient Egyptian symbology.  Spread open wings first appeared in the image of the Egyptian winged disc as well as the winged scarab and Egyptian Godesses, Maat, Nut and Isis.  It is apparent that the image of outstretched wings is a connection to the sky, the heavens or the spirit.

The Plants
Trillium and Mugwort are both native to our Oregon landscape.  Mugwort is a plant that has been associated with and used to induce dreaming.
I picked Trillium because of its three petals.  Three is an archetypal combination that has appeared throughout spiritual paths across the globe.  Some of these include the biblical “trinity” (father, son and holy spirit), the triple goddess: Maiden, mother, Crone; in humans: Body, Mind and Spirit, etc.

The Moth
I included the Polymorphous moth as it’s eye-like patterns are dreamy and the symbolism of the moth being drawn to light in the darkness seemed fitting of a dream.

The Bear
Behind it all is the hidden face of a black bear.  Gentle and strong, dark and mysterious, the symbol of the black bear acts as a force of hidden strength, steadily guiding us along our personal and collective journeys.

Ila Rose is an artist currently working in Oregon and hailing from Eugene.

Rose is inspired and humbled by those who have formed close relationships with the earth. Instances of this human-environment interconnection are rich with shared sym­bolism. Symbols that echo throughout time and space have instinctually landed them­selves in her art. She finds her work guides her rather than the other way around. Science is important and fascinating to Rose however she is not a disbeliever in the magic that lingers in that which is unknown and unprovable. The vastness of what lies beyond our understanding is a space in which she yearns to journey, a black abyss she aches to swim. She sees her canvas as the abyss.